A fantastic collection of unique photographs

Posted by Johnson Thomas at 6:58 AM No comments:

Bizarre Treelike desert rivers in Mexico
Well this certainly is a bizarre sight. In the desert of Baja California, Mexico, there are desert rivers forming treelike figures. This is no photo manipulation or a painting but a true natural phenomena u can see with your own eyes in certain periods in the year.. Stunning..

If we are incapable of finding peace in ourselves,
it is pointless to search elsewhere.
Posted by Johnson Thomas at 4:19 PM No comments:


If you do visit the Bhau Daji Lad Museum, Byculla, on December 9, you might
just find yourself in a garden with a bamboo-made structure, by Tokyo
architects Atelier Bow-Wow. Co-created by the Solomon R. Guggenheim
Foundation and the BMW Group, the BMW Guggenheim Lab is a pop-up cultural
experiment. After New York and Berlin, the co-creators will bring its
programming to the Bhau Daji Lad over the course of six weeks. The lab's
theme is called "Confronting Comfort" and curator David Van der Leer says we
can expect a seven-programme series - ranging from light-hearted sessions to
serious discussions, design workshops and free tours across the city.
http://www.livemint.com/Companies/hfAId1qSuY2JdcnbP4sFLJ/Guggenheim-Lab-to-open-in-Mumbai.html

Guggenheim Lab to open in Mumbai


Mumbai-based urban transport designer Trupti Vaitla is creating a
public interactive competition to see if she can get people to view traffic
junctions differently.

"I am currently working on an open space in M ward, Mumbai-Lotus Nagar, in
which 200,000 people share 1,300 sq meters of open space-a per capita ratio
of almost zero; just to give you an idea of the kind of issues this city
faces," she says.

Vaitla, who also works with the Rachana Sansad's Urban Design Cell (RSUDC)
and the Mumbai Environmental Social Network (MESN), is one of the four-team
members of the BMW Guggenheim Lab, a mobile think tank and interactive
public laboratory on urban innovation that will travel to nine cities in six
years, and which opens in Mumbai on 9 December.

A large L-shaped bamboo pandal, built to resemble a modern version of a
traditional wedding mandapa, will soon be erected by Tokyo-based architects
Atelier Bow-Wow, a firm noted for its exploration of ad hoc architecture and
theories of micro urban spaces, at the Dr Bhau Daji Lad Museum in Mumbai,
which is hosting the event as collaborators of the lab.

The lab will host interactive installations and sessions exploring the
relationship of the city to both the individual and the community, exploring
the possible conflict between the two and their resolution. It will be on
until 20 January 2013. Mobile versions of the mandapa will link the
satellite installations, to be scattered across the city, to the main lab
site. Exact sites are not yet finalized.

Tasneem Mehta, director of the Dr Bhau Daji Lad Museum, says: "It is the
first project of its kind in the city and we are delighted to collaborate
with the BMW Guggenheim Lab. It's about interpreting the city; finding a
creative platform with which to interpret sociological meanings. It's
something that should happen far more often in our city, and maybe this is a
good place to start."

The lab, itself an organic being that adapts to the city that hosts it, will
feature workshops, cultural programmes, film screenings, erect interactive
installations that draw in the public, and engage with urban planners,
architects, sociologists, entertainers and chefs. All events are free. "It's
a whole lot of fun, but it comes with serious intent: to discover how
members of the public would like to engage with their city and how they mean
for their cities to develop and grow," Mehta says.

The Mumbai lab team includes Aisha Dasgupta, a British demographer based in
Malawi, Neville Mars, a China-based Dutch architect, and Hector Zamora, a
Mexican artist based in Brazil alongside Vaitla. The team of four have
crafted the programme along with Guggenheim curator David van der Leer and
curatorial assistant Stephanie Kwai. Lab team members are nominated by an
advisory committee and international group of multi-disciplinary experts.
Delhi-based transportation planner and safety expert Geetam Tiwari, was
recently inducted to the advisory committee of the BMW Guggenheim Lab.

The participatory nature of the programme is city specific and aims to seek
solutions to the city's unique problems. The lab will function in two-year
cycles; every two years, the theme it works towards will change. The first
two years-from 2011 to 2013-the theme has been "Confronting Comfort", which
will conclude with the Mumbai chapter. The Berlin chapter, which ended in
July 2012, raised issues of free space, water testing, and dynamic
connections. The New York chapter of the mobile project concluded in 2011
where it raised questions on transport, commuting and comfort within the
city. Small-scale intervention efforts helped extend the impact of the lab
beyond its fixed duration in the city. 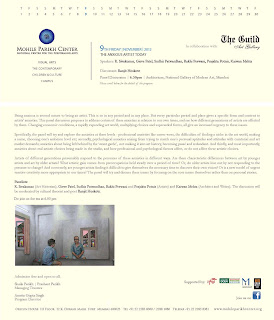 Posted by Johnson Thomas at 6:28 AM No comments: