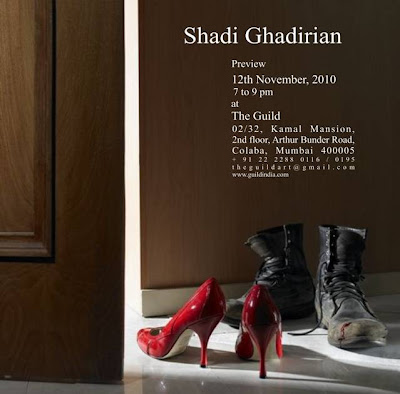 The Guild Art Gallery is pleased to present ‘Shadi Ghadirian - Solo’. The exhibition will showcase selected works from the series Nil, Nil, White Square, My Press Photo, Qajar and Be Colourful series.

Shadi Ghadirian has enveloped herself as one of the most renowned Iranian photographers. Challenging the international preconceptions of women’s roles within an Islamic state, the Tehran-based artist’s photographs draw from her own experiences as a modern woman living within the ancient codes of Shariah law. Her work is intimately linked to her identity as a Muslim woman living in Iran. Nonetheless, her art also deals with issues relevant to women living in other parts of the world. She questions the role of women in society and explores ideas of censorship, religion, modernity, and the status of women.

In 'White Square', Shadi Ghadirian has photographed objects of military use - helmet, canteen, ammunition belt, etc. - that she decorates with a little red silk ribbon. Removed from their context, these accoutrements of war appear at once menacing and delicate, their aggressivity tempered by the feminine element. With 'Nil Nil', these same objects penetrate the domestic space: the menace of conflict grafted onto peaceful everyday life, while in a way also becoming contained by the tranquillity of the familial location. 'My Press Photos', comprise images drawn from press-agency catalogues with old portraits of Iranian military men. Across time and space, war's violence sadly reminds us of its universal, essentially male, dimension. As for her series 'Qajar', the title evokes the dynasty of the same name, under which portrait photography was introduced in Iran. Veiled and dressed as in times of old, posing before 19th-century décors, women presenting objects like a radio, a mountain bike or a vacuum cleaner, like a bridge between two worlds, built upon the rather futile, though so-human, need to possess.

Shadi Ghadirian was born in 1974 in Tehran, Iran. Ghadirian studied photography at Azad University (in Tehran). She works at the Museum of Photography in Tehran. She has exhibited in museums and galleries across Europe, and the U.S.A. including solo shows at the Los Angeles County Museum of Art, California; Photography Festival of Istanbul, Turkey; Gallery B21, Dubai; Al Maamal Foundation, East Jerusalem, Palestine; Villa Moda, Kuwait; Silk Road Gallery, Tehran; Golestan Gallery, Tehran. Her works are in both private and public collections such as the Mumok in Vienna, Centre Georges Pompidou in Paris, The British Museum and Victoria & Albert Museum in London; The Sackler Gallery, Smithsonian Institution, Washington DC; Saatchi and Saatchi, London and Los Angeles Country Museum of Art.