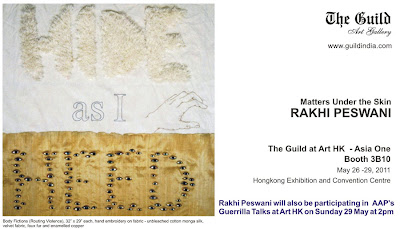 The Guild is delighted to present Matters Under the Skin, the first solo of Rakhi Peswani in Hongkong at Art HK 2011 – Asia One.

Matters Under the Skin is an ongoing project that investigates the lived experiences of a subject that is involved with the processes of creation. By amalgamating various vocabularies- visual, verbal, material and spatial; the work takes shape as a nuanced and layered communication of a language that reveals the ‘hidden’ dimensions of the human body. Body, in this sense, is seen from within, as against its representational mode of being seen and shown from the outside.

The body, here, is perceived as a site of infinite manipulations; both, from within its own machinery and from the outside. It is distinguished as a site of effects that constantly build the physiological and psychological internals...

The discovery, understanding and articulation of these effects are shaped through the practices of manual crafts. In this sense, the process/craft takes a literal centrality through which the causes and effects of the body are brought to existence. The inherent contradictions and conflicts of an individual are untangled in a Gandhian manner, through manual processes.

These manual processes are a consequence of direct manifestations of bodily gestures. Sometimes these bodily gestures are also seen as the first step to understand the technique of the craft itself; of graphic drawing, hand embroidery, sewing etc.

Thus making (or writing) ‘fiction’ is understood as an important activity to voice the inherent ‘matters under the skin’...

The works, thus, are an attempt to physically realise various mental images. To extract these images out for re-presentation, they are articulated as two dimensional, horizontal surfaces, almost replicating manuscript illuminations or early book illustrations. They have been reduced from their narrative form; embedded onto the physicality of the architectural surface and brought within the corners of physical spaces that the body inhabits. – Rakhi Peswani

For Rakhi the expanse between what we see and what we touch and respond to has only increased with the passage of modernity. The unified body has been fragmented into inert zones of perception. This experience of fragmentation has structured her focus to the processes of traditional crafts; allowing her to re-route the notion of oneself through the language of these processes. Peswani’s point of departure is to locate a visual / verbal / tangible language that blends the local character of our system and the global character of verbal language. She further layers this juxtaposition with the inclusion of verbal text, fabricating discreet ironies within the material processes to depict contemporary identities.