regarding Iran the apparent acquiescence of conceptual poetics Curated by: Shaheen Merali 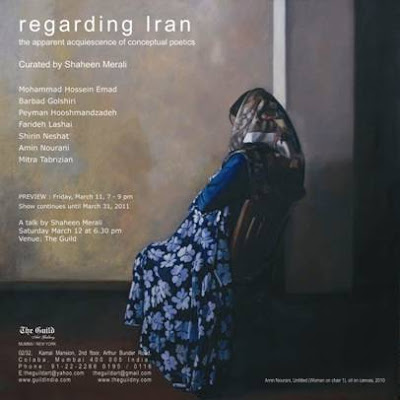 the apparent acquiescence of conceptual poetics

The Guild Art Gallery is pleased to present regarding Iran the apparent acquiescence of conceptual poetics curated by Shaheen Merali, opening on March 11th 2011. It is the third exhibition of an ongoing curatorial initiative that has so far been produced in two different countries. Thus far, the curator, Shaheen Merali, has worked with Kunsthalle Brot, Vienna for The Promise of Loss and at the Tokyo Gallery for The Stalking of Absence, to present work by artists that investigates and provides a generous account of Iran’s contemporary situation. The aesthetic inventions of these artists provide exciting probabilities for an inquiring audience to develop an understanding of issues pertaining to Iran and its contested place in the world.

For The Guild, Mumbai, eight artists’ work from within and without Iran is presented as a medium scale group exhibition opening on Friday, the March 11, 2011, close to the occasion of the Persian new year; Norouz. The research for this exhibition involved both studio visits and some remote conversations, finally curating the artists’ works for the first ever presentation of work in India by these contemporary artists who live and work in Iran and also in England and the USA.

Much of the artists’ work is found in the International arena of a visual culture that is affected by a sense of belonging and longing that permits specific identity politics that are conclusively inflected and wrapped in assemblages, based on taking an ethical position encased within a poetic distance.

The curatorial position has considered the following two observations:

i) Curating any regional or ethnic domain, including that of Iran, is made difficult by the sophisticated, cultural palimpsest of the region, its traditions and its people, although it is still important, even necessary, to evaluate its specific aesthetic and cultural developments.

ii) Historically, the country is of ontological importance and has been a domain of highly discursive thinking within its expanses. In its present constellation, Iran has suffered and endured many different circumstances and faced specific challenges from a range of biased nations and religiosities; this, combined with its own reactive epithet, provides for a very pertinent set of conditions which enables the production as well as sets down the role and rules, of aesthetics which have had to function, until now, within a curtailed freedom.

An evolutionary aesthetics of adaptation and an approved cultural code has emerged. Within this curtailment of immobilised consent and the threat of the eradication of dissenting voices, a new formula of the putative whole has emerged, an increasingly conscious alphabet of poetic and political conjunctures.

A catalogue will be produced with installation views and a talk with the curator will be organised in the first week of the exhibition.