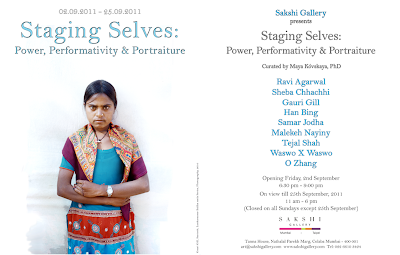 30 min. before the opening I will be giving a curatorial walk-through for the press. It would be great it you can make it. Let me know and we can have a media packet ready for you.

Here's a brief concept note to give you a quick overview of the show. Images and the catalogue essay available upon request.


Recognizing that power inheres in the gaze, and the gaze constructs as much as it captures, Staging Selves: Power, Performativity & Portraiture, curated by Maya Kóvskaya, turns on a number of questions: What does it mean to represent; to re-present; to make present again that which is no longer before us? Whose gaze counts? Whose gaze structures whom? Who has the right to “represent” whom, and how does who is doing the representing change what gets represented? Who has the right to look? Who has the capacity to see?


The exhibition features the works of artists from India, China and Iran—Ravi Agarwal, Sheba Chhachhi, Gauri Gill, Han Bing, Samar Jodha, Malekeh Nayiny, Tejal Shah, Waswo X Waswo, and O Zhang—who have made it a part of their practice to question, problematize and blur the artificial binary between the “staged and the” documentary,” self-consciously investigating the power relations implicit in the pretension of “representation.” Some have sought to create conditions for power-sharing between subject and artist, sometimes grounded in ethnographic participation in the lives of their subjects, and rooted in dialogue with the subject about how the self is to be performed before the lens. Others utilize photographic practices that de-center the position of the artist; foreground the constructed nature of the image; or highlight the role of the artist in transforming found images, such as old family portraits, to highlight a historical moment before politico-religious rupture; and in doing so push the viewer to consider how images contain the power to constitute selves in various ways.


United by the common thread of self-conscious artistic practice and a focus on subjects who are photographed at the intersection of the staged and the documentary, as they perform the roles of themselves, the works in Staging Selves offer a dialogue about the necessary incompleteness of “representation,” and the implications of asymmetrical power relations, inherent in the processes of “documenting” lives, creating “representations,” or “staging” the “performance” of an “Other” as a Self.


Hope you can make it!